Zambia’s Linda Kasonde recently won the IE University’s Epic Award for Women Inspiring Women. EPIC, an initiative launched by the IE Global Alumni Relations, aims to share the stories of its outstanding alumni across all IE schools (masters and undergraduate programs) to inspire the IE Community. Kasonde is the first woman to lead the Law Association of Zambia in 2016 in the 50 years existence of the body.

By Socrates Mbamalu, on ThisIsAfrica.me

Linda Kasonde is a patriot with a heart for the African continent, that’s what her Twitter bio says. The Zambian lawyer recently won the IE University’s Epic Award for Women Inspiring Women. EPIC, an initiative launched by the IE Global Alumni Relations, aims to share the stories of outstanding alumni across all IE schools (masters and undergraduate programs) to inspire the IE Community. EPIC stands for Extraordinary People Inspiring the IE Community.

The second edition of the EPIC Awards was launched this year following the success of last year’s awards. The stories of 15 finalists seen as outstanding examples of the impact IE alumni is making around the world were shared.

Kasonde was part of the 15 finalists, and among the three in the Women Inspiring Women Category. The list of 15 had only two Africans. 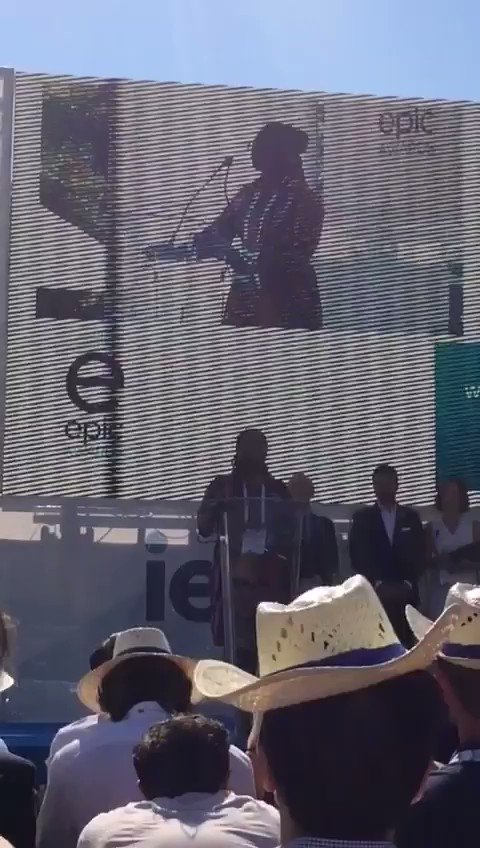 I won the IE University’s Epic Award for Women Inspiring Women! Muchos gracias to all who nominated me and voted for me! #IEGAW

Kasonde was elected President of the Law Association of Zambia in 2016, and she is the first woman to lead the association in the 50 years existence of the body.

Kasonde who deals with the task of handling sensitive issues about government and the rule of law said “These are the aspects that attract the greatest public attention. It often means getting into a conflict with the government.”

She advanced her studies by doing executive programs at IE and Harvard. “If, like me, you have the bad luck of holding my position during a period of national elections, you’ll have to assume some risks and be rather audacious. That requires courage, and courage is what makes the difference between achieving greatness and losing hope.”

Attaining her position, which was traditionally held by men, wasn’t easy. It meant unbreakable will and seven years of hard work. Since reaching the top of the Law Association of Zambia she’s had to fight several battles. One of the biggest challenges that the Association has faced was disputing the Zambian Government’s position that ministers could remain in office after the dissolution of Parliament. The Law Association went to the Constitutional Court and sued every Minister and deputy Minister in their individual capacities for remaining in office after the dissolution of Parliament.

“As President of the Association, I wasn’t very popular with the government, and was discredited by the news media. But we defended our positions, and four days before the general elections the Constitutional Court ruled in our favour. It not only established that the ministers would have to leave their position after the dissolution of Parliament, but also ordered that they return their salaries and any emoluments they had received during the period in which they had illegally occupied their position. It was an historic decision. What I’m trying to say is that leadership brings with it many challenges. Doing the right thing and doing it well isn’t for the weak”, says Kasonde, who mentions that her period at IE helped her perfect the skills for managing a crisis..

For her, being a woman with influence is always harder. Kasonde emphasizes that a woman who chooses to be a leader can’t be afraid of failure. She also stresses the importance of colleagues in reaching her goals. “I don’t think we include men enough. Without getting them involved, we can’t win this battle.” In her opinion, the key for women who want to make a difference is in being resilient and having a clear will to lead.

Read the information on: https://thisisafrica.me/zambias-linda-kasonde-wins-ie-universitys-epic-award-women-inspiring-women/

Why Tokiko Shimizu is a Good Choice for Executive Director at Japan’s Central Bank
June 10, 2020

Daniela Seixas: How six months can change everything
June 4, 2020

Purple Corner gender equality project, one of the best library practices in the world
June 3, 2020
Twitter