Kaoru Lino: “One day in March, I interviewed four alumni from International MBA who graduated in different years to ask their career path, IE experience and future goals”.

Yoshida (pseudonym): My name is Yoshida. I graduated in December 2014. I studied abroad at my own expense after working at a Japanese consulting firm and started a business related to travel right after graduating.

Kurosawa (pseudonym): I also graduated in 2014 and currently work for a foreign e-commerce company. I used to work in sales at a major trading house where we sold piped studied abroad for an MBA for a career change.

Honda (pseudonym): I graduated in 2017. I was involved in auditing at an auditing firm as a certified public accountant, later joined the finance department at a U.S. healthcare company and am now working for a foreign manufacturer.

Murakami (pseudonym): I graduated in 2010. I studied abroad at IE after working for a major trading house and am now in overseas sales for energy at a major Japanese manufacturing business. I’ll be promoted next month to section chief for the Middle East.

Lino: Can you now tell us why you chose IE?

Yoshida: It’s ranked at the top and the courses are for a year. It’s rich in diversity. And it has strengths in entrepreneurship. I went on a school visit, and the deciding factor was that the students were interesting and there were a lot of people who were free.

Kurosawa: IE had the most unique image and its values like entrepreneurship and social responsibility matched my interests. There were a lot of unique and interesting people when I actually met its graduate image like a zoo. ((laugh))

Honda: I questioned the monochronic way of thinking when I worked at a U.S. company where all the decision-making was top-down. Back then, Id other terror organizations were causing incidents across the globe and I was thinking about how you could get along with people with diverse ways of thinking. That’s why I decided on IE, because of its high rate of diversity and that it was for a year.

Murakami: Because I was raised in the U.S., I wanted an MBA from a non-English speaking area. I studied Spanish in high school and college, so I had the ability to read the newspaper. The other decisive factor was that I could get a dual degree from the Fletcher School in Boston. I worked in energy at a trading house and (thought); renewable energy was the next thing. But many of the companies in that field were small, so in case I were to be kicked out, I wanted to obtain the skills to manage to start a business on my own. And because the energy industry is impacted by policy, I wanted to study environmental policy at the Fletcher School.

Kurosawa: Of course, it’s true that I obtained academic knowledge at IE, but what made the strongest impact on me is the strong impression I received that ambitious people abroad not only work and study; they also enjoy life. (My) mindset has changed significantly on work-life balance. And also, the IE intentionality for entrepreneurship. If you have an idea you always receive only positive feedback. It felt like a psychological barrier I’d gone ahead and made in my mind was being removed. I think there are also a lot of people in Japan who have high capacities can do their work but limit their potential by believing that they can’t do something. One of the purposes of getting an MBA was to eliminate my fixed thinking.

Yoshida: Seeing graduated local startups giving presentations at an entrepreneurship event right after I enrolled, at a considerably early stage of (my) MBA, I thought the hurdles for entrepreneurship weren’t as high as I’d thought. Otherwise, there were the Pitch Slams at Area31 each Thursday as we drank beer which was very encouraging that people like them who appeared average at a glance could start businesses.

Honda: Because I always worked in the area of finance, although I was interested in entrepreneurship I never had an opportunity to come into contact with it. That’s why I wanted to study about startups at IE as well. As it turned out, I chose a startup lab, worked together with my Japanese colleague and members from various countries up to the venture lab, and that was where our team received a best innovation prize.

Lino: What were your actual impressions on diversity, which had been mentioned in your reasons for applying?

Murakami: As international as U.S. schools may be said to be, the ratio of foreign students as 20 percent at most. In that sense, the students at IE came from a real variety of countries it was fun that there were no majorities.

Honda: There were a lot of people who were LGBTQs, they had all come out like it was perfectly normal, and there was atmosphere where it was naturally accepted. Out in the global world I gained an acute understanding of the importance of being open-minded. Having lived in Japanese society where people have public fronts, this was my first time to live abroad and I was able to achieve the courage to properly speak my mind.

Lino: What kind of dreamt objectives do all of you have?

Yoshida: The company I started is still small in scale, so I would like to create more hires in about the next ten years. In particular, contributing to regional industries; I’d like to make it so young people who are good will be able to work in regional areas. The travel industry is one receptacle for the service industry. But it still isn’t considered a cool industry. For example, people think that a CA is a cool occupation; I’d like to make tour guided hotel concierge duties occupations that people admire as they do the aviation industry.

Honda: I would like to start up an independent business live my life supporting entrepreneurs who have dreams while using my specialized knowledge. And on top of that, I’d like to be requested by name not only in Japan but globally.

March 8 is International Women’s Day. Various events and demonstrations were held across the globe under the slogan, “Press for Progress”. Under the theme that “Women Pass It On” and to pass on the legacy to the next generation, IE offers support through scholarship programs, mentoring, and through networking events held throughout the world so that female students, professors, staff, and candidates may leverage their individual characteristic thrive in business, technology, and all other fields.

Have those of you who have read this group interview up to this point noticed?

All four of the graduates we interviewed were women.

Isn’t it true that when they are talking about their career development through their MBAs, the things that they learned, their objective their dreams, we should turn our attention not to their gender but instead to the unique backgrounds that each of them had their way of thinking? Would you have been able to read this group interview without (being) biased if it said at the beginning that it was a group interview with female graduates?

At IE, where we embrace diversity, we wrote an article as we have today as a first step for that (purpose). 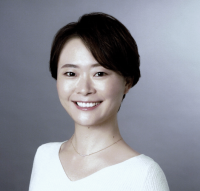 Kaoru IINO. Country Director, Japan, IE University. Kaoru is responsible for managing recruitment & admission related activities and branding in Japan for IE University. She has 16 years of extensive experience in marketing & B2B business development in the technology sector. Her career started as an engineer and transformed into sales & marketing after MBA at IE Business School in 2008. In her free time, she practices classical yoga & meditation. Mother of a 6 years old girl.