Melinda Gates: It’s Time for a New Era for Women 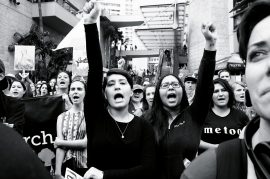 “If we want to change the world, we should invest in the women who already are..I’m hopeful that in 2018, we’ll do more than imagine that future. We’ll start making it a reality….”

“You may never know their names. They work beneath the headlines and far from the spotlight. When they receive formal recognition from bodies like the Nobel Committee, it is the exception, not the norm. But the fact remains: under the radar, grassroots organizations led by women are quietly changing the world.

The year 2017 has been a painful reminder that when men hold most of the power it’s all too easy for them to abuse it. But the moment of reckoning prompted by the “Me Too” conversation has also proven that by coming together and speaking in one voice, women can tip the balance. Thanks to these brave women, men are being held accountable for their actions as never before. It’s easy to dismiss the whispers of one woman. It’s much harder to ignore a movement.

This is a story that repeats itself all over the world. Women’s movements have successfully campaigned for workers’ rights in Pakistan, widows’ rights in Ethiopia and disability rights in Indonesia. They successfully pushed for an end to Liberia’s brutal civil war in 2003 and won suffrage in the U.S. back in 1920. In fact, a 2012 study, published in the American Political Science Review, looking at 70 countries over four decades found that women’s movements were more effective at advancing policy change–particularly on violence against women–than most other factors, including a country’s wealth and the number of women lawmakers in a legislative body. Simply put, women get things done.

Why? For one, women’s movements tend to be driven by people who share a deep, personal stake in the future of their communities. When I talked to Leymah Gbowee, who helped lead the movement that brought peace to Liberia, she told me that part of their success stemmed from the fact that the women she organized weren’t motivated by power or politics in the abstract–it was personal. “It was about our livelihood,” Leymah says.

Not only do women’s movements bring a sense of urgency to the work that they do, their deep knowledge of the customs that shape their communities offers important insight into solutions. When development policies are set from the top down, even though they may be well-intentioned, their impact doesn’t always reach everyone equally. Women’s organizations help drive progress that is more inclusive and sustainable.

What makes their track record even more remarkable is that many local women’s organizations are running on a median budget of just $20,000 a year. Considering their enormous potential to make life better for all of us, I think it’s time we give them a raise.

So here is my pitch: if we want to change the world, we should invest in the people who already are. In 2018 that will mean challenging ourselves to do a better job of finding and funding grassroots women’s movements. Right now, less than 2% of global funding for gender issues goes to local women’s organizations.

In recent years, governments like those in the Netherlands and Canada have invested significant resources in women’s movements, and I hope that others will follow suit. You can be sure that Bill and I will. Over the next three years, our foundation will be investing in women’s funds like Mama Cash and networks like Prospera, which provides financial support to women’s funds and grassroots women’s organizations in over 170 countries, spanning Africa to Asia to Latin America.

Imagine what’s possible if the world decides to partner with these organizers as their allies. Imagine how much more we can accomplish if the women who are doing so much to move the world forward finally have our full support behind them.

I’m hopeful that in 2018, we’ll do more than imagine that future. We’ll start making it a reality.”

Gates is a co-chair of the Bill & Melinda Gates Foundation